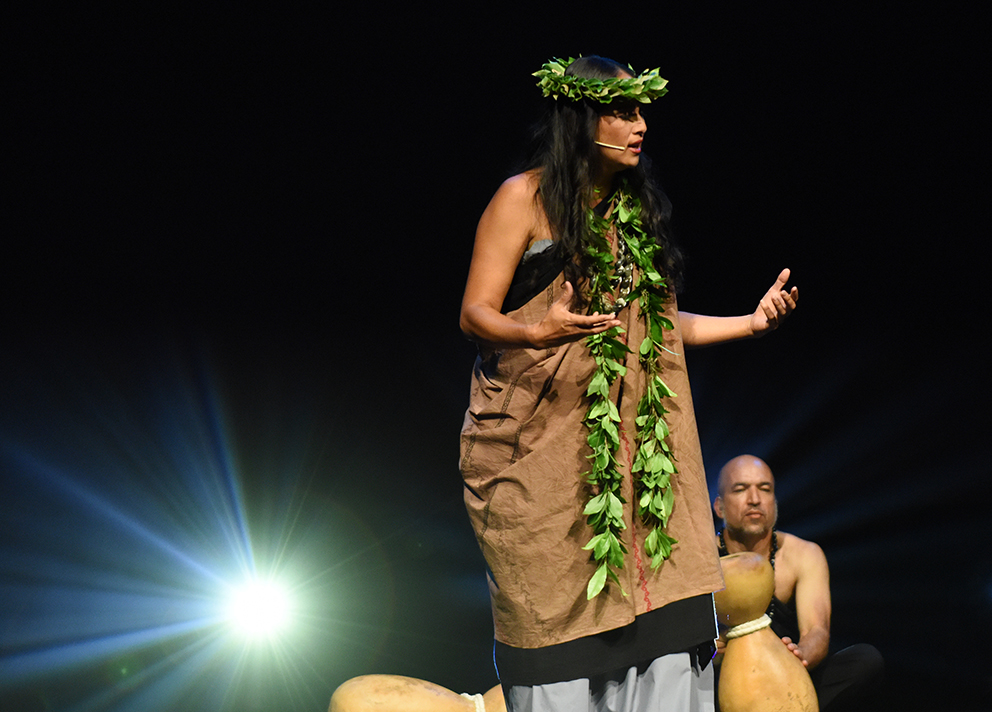 View Behind the Scenes Trailer

Created as a gift for his son during the pregnancy, The Story of Everything is Hawai‘i Poet Laureate Kealoha’s way of exploring humanity’s rich and diverse explanations for the origins of life. Kealoha, a founder of the famed Hawai‘i Slam and an MIT nuclear physics graduate, says that, “The Story of Everything is my most important work and is the culmination of everything that I have learned throughout life. It took me half of my life to study the science behind this piece, half of my life to study the art of poetry and storytelling, and then about half a decade to actually create this work.”

The Story of Everything (TSOE) took root in Kealoha’s mind in 2011 when his then-girlfriend told him he was going to be a new father. Kealoha started thinking about all the knowledge he should pass on. How could he tell his child how everything began, making all the scientific details interesting and easy to understand? “I don’t subscribe to any particular religion,” Kealoha says. “The thing I subscribe to is science.” The poet/physicist strongly believes that science and indigenous culture don’t have to be at odds with one other. “The Hawaiian creation chant, the Kumulipo, reads like evolution theory,” he says. “So many Native Hawaiian stories are based on the science of what people observed around them.”

In late 2014, Kealoha received support through the Native Arts and Cultures Foundation Pilot Community Inspiration Program, also supported by Leonard & Rose Freeman Family Fund of the Hawai’i Community Foundation and National Endowment for the Arts, to write an hour-long performance piece to help youth understand where we come from, using musicians, performers, and visual artists.

Native Arts & Cultures Foundation President, Lulani Arquette, and Engaging the Senses Foundation’s (ETSF) Chief Executive Officer Mona Abadir, (a long-time friend, advisor & Chair to NACF’s National Leadership Council), along with a small audience, had the good fortune to watch Kealoha’s first solo black box performance of TSOE at Kumu Kahua Theatre in Honolulu, Hawai‘i. This initial group, along with a large audience of several hundred people, were delighted to attend Kealoha’s full theater performance of The Story of Everything, which premiered at Mamiya Theater in 2015 in Honolulu, Hawai‘i. The project grew in scope and ambition from there, and Kealoha premiered an expanded production as part of the 2017 National Bioneers Conference in San Rafael, California. Engaging the Senses Foundation sponsored and attended the performance at the Marin County Civic Center.

For a number of reasons — including residency on the islands by Mona Abadir and ETSF Creative Director Sabrina Coryell, their decades-long involvement in culture and the arts in Hawai‘i and California, solid production experience, and the timely, pertinent messaging through the universal language of poetry, music, dance and visual arts in the performance — Engaging the Senses Foundation decided to commit time and resources to the production and direction of the feature-length film of The Story of Everything. First, in 2018, ETSF filmed the cast in a studio soundstage at Smashbox in Los Angeles, California. Then ETSF produced and filmed a theater performance at the Hawai‘i Theatre Center in 2019, to a sold out 1400 seat audience, with limited local educational sponsorship by Hawai‘i Pacific University and Chaminade University. To complete their film production, ETSF added special effects and filmed on location on the islands of Kaua‘i and O‘ahu. The non-profit feature-length film was completed in January 2022.

In an era when we face both the knowledge that the historical and present-day injustices of systemic racism consistently expose people of color to reduced quality of life, and that the world itself is in peril due to climate change, a project focused on light, on solutions, and on the transmission of hope is a cause for celebration. Engaging the Senses Foundation, a 501(3)(c) Foundation is pleased to present its world premiere at Maui Film Festival on July 8, 2022 at Maui Arts & Culture Center.

Special thanks to Kealoha, the cast of TSOE, the crew and team members who have helped with production of the theater performances and filming over the last several years, and all the venues, partners, and audiences who have participated in and supported the transformative gift that is The Story of Everything.